Israeli satellites on Saturday revealed two Russian Su-57s at its Hmeimim air base in Syria.

A Russian official said the Su-57s were deployed to the war-torn country as a deterrent "for aircraft from neighboring states, which periodically fly into Syrian airspace uninvited."

Additional satellite images from July 2017 also showed 10 other kinds of Russian jets and planes, 33 aircraft altogether, stationed at its air base in Latakia.

There's probably, however, more than 33, as some jets and aircraft could have been conducting sorties or flying elsewhere when the images were taken.

Moscow first sent fighter jets to Syria in 2015 to help the Assad government, which is a large purchaser of Russian arms. In the last few months, Russia and the Syrian regime have increased bombing runs in Idlib and Eastern Ghouta, killing, injuring and displacing thousands of civilians.

Here are the 11 kinds of military jets and planes Russia has in Syria now: 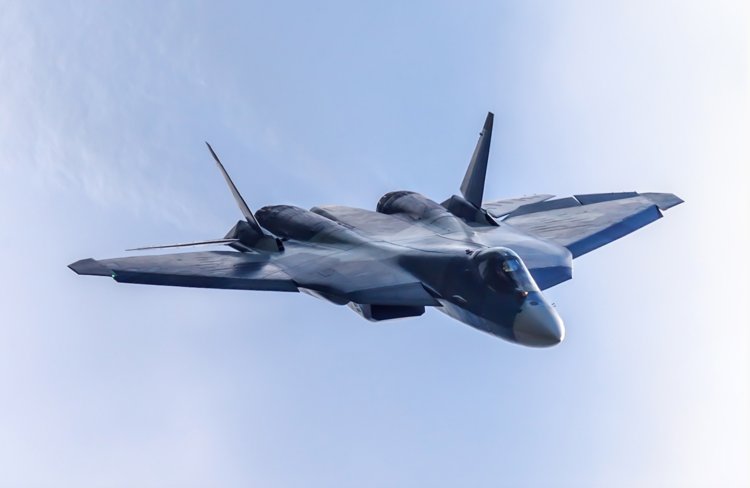 The Su-57 is Russia's first fifth-generation stealth jet, but they are only fitted with the AL-41F1 engines, the same engine on the Su-35, and not the Izdelie-30 engine, which is still undergoing testing. 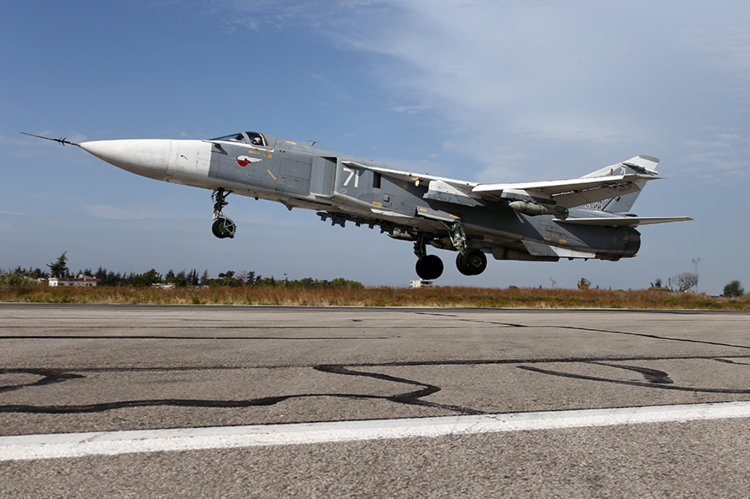 An Su-24 taking off from Hmeimim air base in 2015. Image: Russian Ministry of Defense

The satellite images from July showed 11 Su-24 Fencers, but that number might now be 10, since one Fencer crashed in October, killing both pilots.

The Su-24 is one of Russia's older aircraft and will eventually be replaced by the Su-34, but it can still carry air-to-air and air-to-surface missiles, as well as laser-guided bombs. 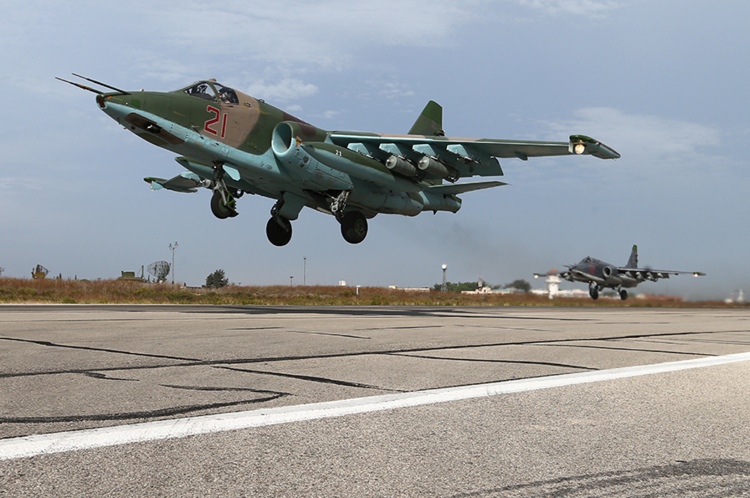 An Su-25 taking off from Hmeimim air base in Syria in 2015. Image: Russian Ministry of Defense

The Frogfoot is another of Russia's older attack aircraft. It's designed to make low-flying attack runs and is comparable to the US's legendary A-10 Warthog.

One Su-25 was also shot down by Syrian rebels and shot the pilot before he blew himself up with a grenade in early February 2017.

The photo below, taken near the Hmeimim air base in 2015, shows an Su-25 carrying OFAB-250s, which are high-explosive fragmentation bombs. 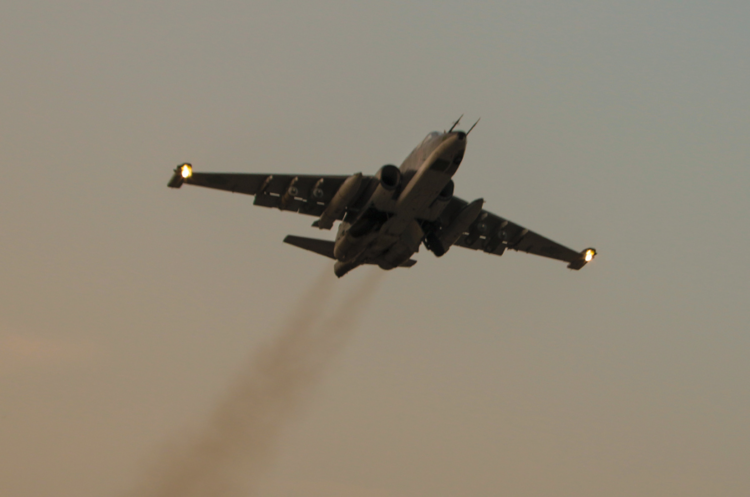 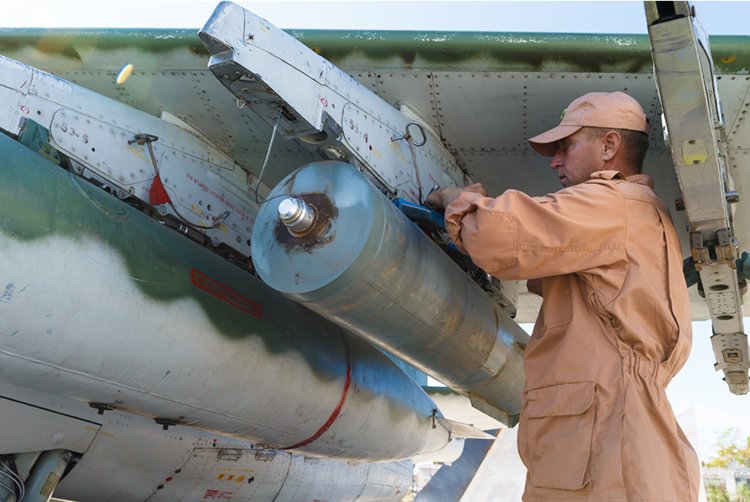 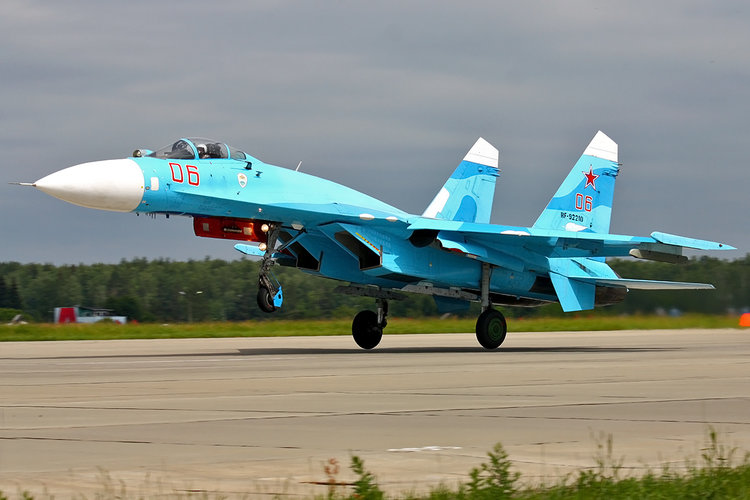 The satellite images from July showed three Su-27SM3 Flankers, which were first sent to Syria in November 2015.

The upgraded Flankers, which are versatile multirole fighters, were deployed to the war-torn country to provide escort for its other attack aircraft, among other tasks. 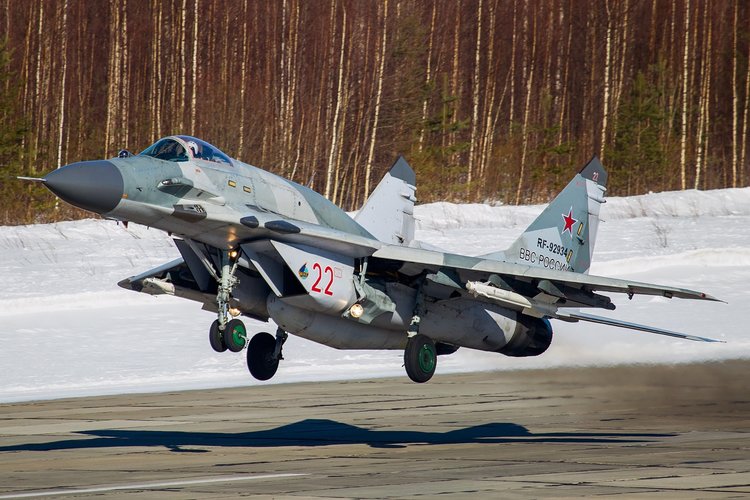 Moscow sent an unknown number of Mig-29SMT Fulcrums to Syria for the first time in September, so they were not seen in the satellite images from July.

The upgraded Fulcrum is able to carry a variety of air-to-air and air-to-surface missiles as well as laser-guided bombs.

The video below shows the Mig-29SMTs in Syria for the first time. 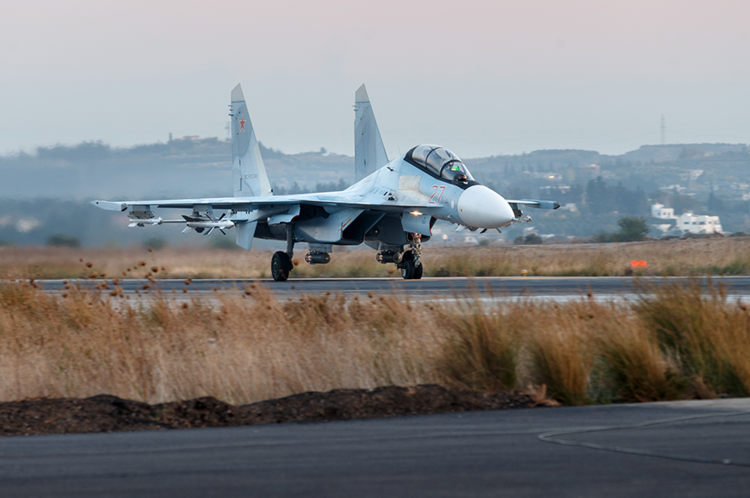 An Su-30SM at Hmeimim air base in Syria in 2015. Image: Russian Ministry of Defense

The Su-30SM, a versatile multirole fighter that's based off the Su-27, carries a variety of air-to-air and air-to-surface missiles and laser-guided bombs. 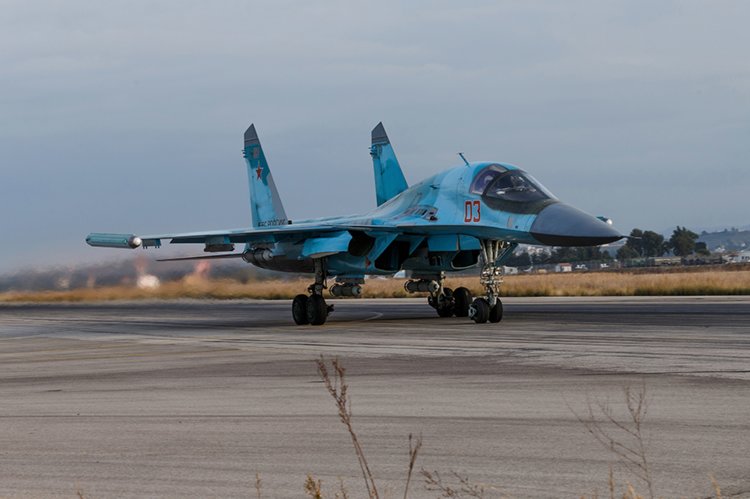 The Fullback, which first deployed to Syria in September 2015, was Russia's most advanced fighter in the war-torn country for over a year. 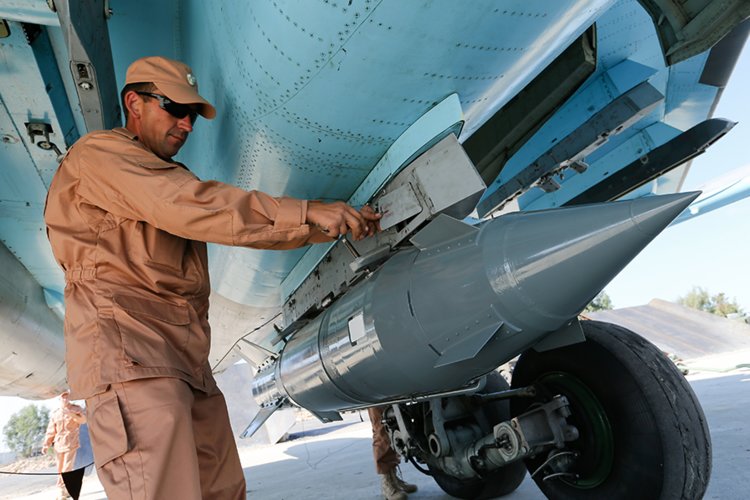 The image below shows Russian airmen installing precision-guided KAB-500s at the Hmeimim air base. One airman is removing the red cap that protects the sensor during storage and installation. The white ordnance is an air-to-air missile. 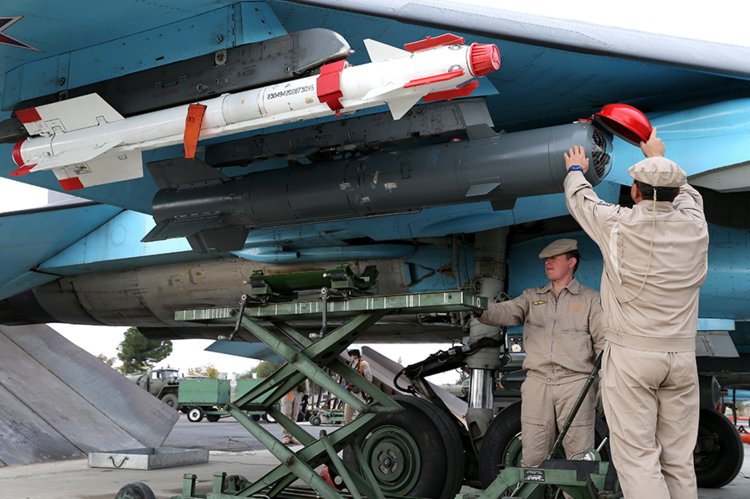 The video below shows a Fullback dropping one of its KAB-500s in Syria in 2015: 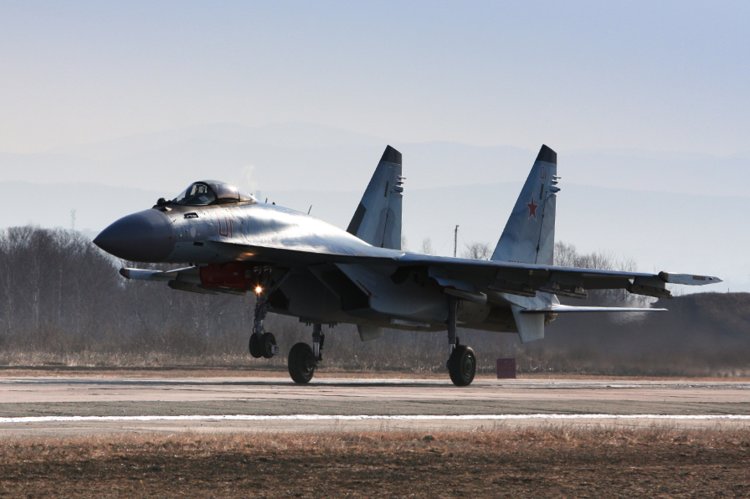 The Flanker first deployed to Syria in January 2016 and is one of Russia's most advanced fighters, able to hit targets on the ground and in the air without any air support. 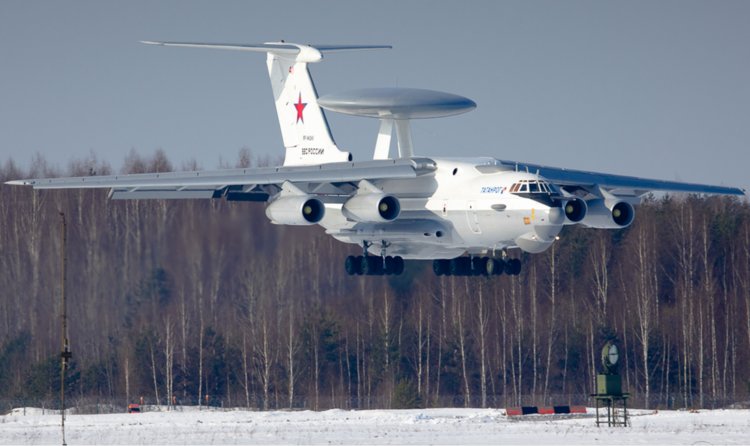 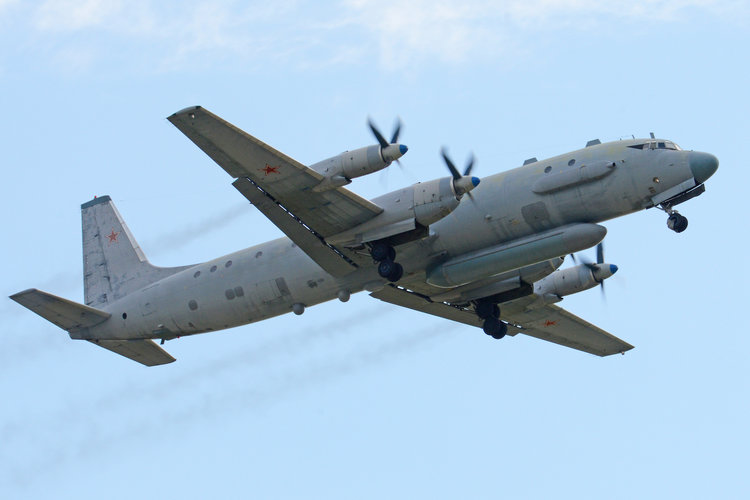 The Coot "is equipped with a wide array of antennas, IR (Infrared) and Optical sensors, a SLAR (Side-Looking Airborne Radar) and satellite communication equipment for real-time data sharing," according to The Aviationist.

It's one of Russia's most sophisticated spy planes. 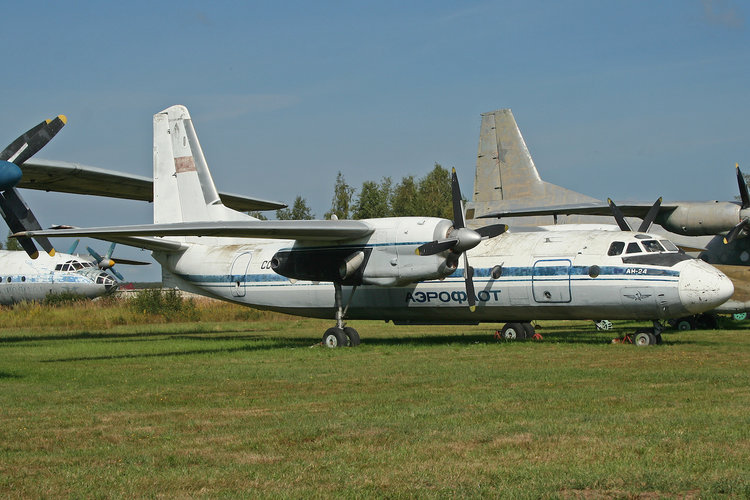 The An-24 Coke is an older military cargo plane. 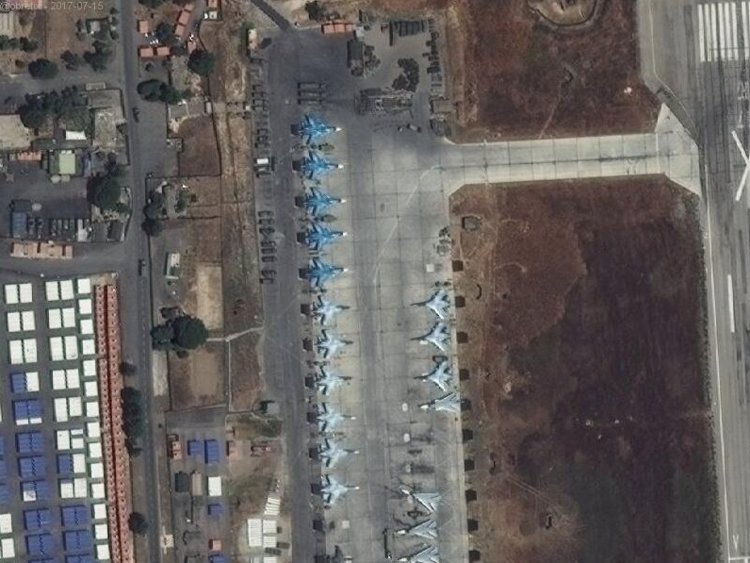 Since 2015, Russian airstrikes in Syria have taken out many ISIS fighters — although their numbers are often exaggerated — but they have also killed thousands of civilians.

The Syrian Observatory for Human Rights reported that between September 2015 and March 2016 alone, Russian airstrikes had killed about 5,800 civilians.

In the last few months, Russia and the Syrian regime have increased bombing runs in Idlib and Eastern Ghouta, killing 290 civilians in one 48-hour period last week.

"No words will do justice to the children killed, their mothers, their fathers and their loved ones," the UN recently said in a statement. "Do those inflicting the suffering still have words to justify their barbaric acts?"

A number of monitoring groups have also accused Russia of deliberately targeting hospitals and civilians, but Moscow barely acknowledges the civilian deaths and often denies it.

Officials say that benefits offered by the National Cemetery Administration are the most underutilized of veterans' perks.

US Opens Embassy in Solomon Islands to Counter China

"The Department of Defense must show taxpayers that it is a responsible steward of its funds," wrote four senators and two...

Get the Military Insider Newsletter

Get the latest on pay updates, benefit changes and award-winning military content. Right in your inbox.

By signing up, you agree to our Privacy Notice.
Thank you for subscribing!

Verify your free subscription by following the instructions in the email sent to:

Before a Secret Raid on an ISIS Leader's Mountain Cave Complex, US Forces Ran the Mission at a Special Recreation of the Target Area

It's a similar technique to the one used before the 2011 raid that brought down Osama bin Laden.

The suicide aboard the George Washington comes a month after the Navy released its first report on the last three suicides...

The Defense Finance and Accounting Service is denying a widespread issue of erroneous withholdings.

Candyce and Dustin Brown last spoke to their son Hunter by phone on Sunday, Jan. 8, discussing the class schedule for his...

The U.S. made fresh accusations this month that Kim Jong Un is providing arms and ammunition to aid Putin’s war, including...

'That Pisses Me Off': Congressman to Lead Panel on Struggles for Troops Focusing on Pay, Food Insecurity

Boosting pay for junior enlisted service members and improving military housing conditions will be among the priorities of...

The federal government is the largest single employer of veterans—they want your subject matter expertise, transferrable skills, and security...

US Weighs in on Government Shake-up in Kyiv

The State Department is weighing in on developments in Kyiv as several senior Ukrainian officials, including front-line governors, lost...

Around 600 French soldiers deployed as part of a NATO battle group in Romania held a combat exercise on...

President Joe Biden thanked western allies providing military support to Kyiv as he announced on Wednesday that the United...

They Said the Rise in Military Suicide Is a Mystery. Traumatic Brain Injury May Be an Answer.

Veterans who have had a head injury are at higher risk for suicide, but these deaths can be prevented, experts say.

What Happened to Members of the Military Accused of Storming the Capitol on January 6?

At least five service members allegedly were part of the deadly pro-Trump mob that assaulted the U.S. Capitol on Jan. 6.

The policy grants 12 weeks of leave for new mothers and fathers, including adoptive and foster parents on active duty or full...

Lt. Gen. Telita Crosland's experiences while serving as deputy Army surgeon general and as a family physician will influence...

An animal rights group says that it has successfully lobbied the Navy to end a pair of studies that involved subjecting sheep...

Ira “Bob” Born, a candy company executive known as the “Father of Peeps” for mechanizing the process to make the marshmallow...

A General Warned of an Impending War with China. Airmen Under His Command Say it Was 'Inappropriate'

Mike Minihan, a four-star general who has led Air Mobility Command since 2021, has been known for his loud, proud and high...

A 2021 survey that found that 66% of women and 48% of men in the Air Force reported experiencing some form of interpersonal...

Nine military officers who had worked decades ago at a nuclear missile base in Montana have been diagnosed with blood cancer.

The Justice Department has dropped its probe of Gen. John Allen for his role in an alleged illegal foreign lobbying campaign...

After a Marine's Death, This Veteran Nonprofit Made Sure His Kids Could Stay in School

Folds of Honor provides scholarships to the families of fallen or disabled service members.

The Spirit of Norfolk caught fire during a cruise down the Elizabeth River on June 7, 2022, while 108 people were on board...

Coast Guard to Resume Fight Against Illegal Fishing in Pacific

It is estimated that 1 in every 5 fish caught around the world is caught illegally.